For the third year in a row, my friends and I planned a big trip for Veteran’s Day. Each year the trip got bigger, and this year we set our sites on the Lowest to Highest Route. The people joining me were: Adam and Matt (whom I had done a lot of hiking with), Clax and Super Soaker (whom I had met on the PCT) and Ari who I met through the hiking club. I knew that the task in front of us was massive and that it was unlikely that we would all finish, so beforehand we all agreed that we would not wait around for people unless someone suffered a major injury.

We also agreed to attempt this hike in the self-supported thru hiker style, meaning no driving or riding in vehicles or no support crew of any kind. We cached no water. We did pick up some cold weather gear in Matt’s car at Whitney Portal and purchase some food at the Carl’s Junior in Lone Pine. We mapped out an original plan to complete this hike in less then 60 hours, however the whole weekend we got further and further behind this pace. We made one major diversion from the low to high route which was the Cerro Gordo Alternate, the reason for this was to get water that the great folks at Cerro Gordo had left for us and break up a 57 mile dry stretch. This made the route a mile shorter, but it added a ton of elevation change.

I fractured the 5th metatarsal in my right foot 2 months ago running and as such I had not done really anything in terms of hiking or running in the past 2 months. Because of this, I was thinking about this trip for most of the last few weeks leading up to it.

Finally we were in Death Valley after dropping Matt’s van off at Whitney Portal and squeezing all six people into Clax’s Car. In my excitement I had left my phone in Matt’s car meaning I would have to rely on the others for navigation. We tried to sleep for 2 hours, but I was too excited to sleep which I would later regret greatly. We arrived at Badwater just before 3am as planned, and we were off. This picture was taken at 3:03am, just before we set off across the vast salt flats towards the Panamints.

We set out across the salt flats giddy and excited. It was incredible yet disorienting to be walking across such a large and monotonous plane at night. At times we could have sworn that we walked in a giant circle but upon looking up at the stars and seeing the North Star, Polaris, on our right, and Orion to our left, we realized we were going the right way.

The sun crested over the Black Mountain Range and cast a shadow on the mighty Panamints in front of us. We began to make our way up the massive alluvial fan, which was actually easier then walking across the uneven salt flat. 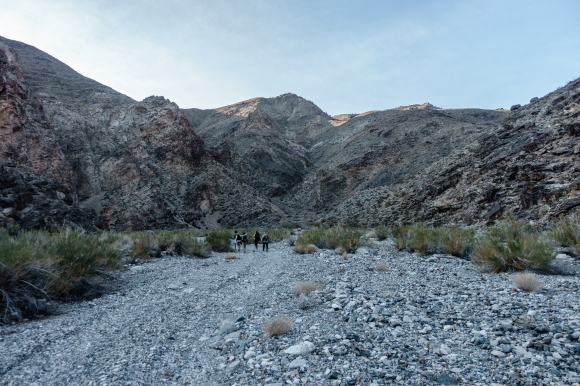 Upon reaching Hanuapuah spring, we refilled our water and cameled up for the impending 35 mile dry stretch. Unfortunately, signs indicated that this water had been contaminated with pesticides used on an illegal cannabis grow, but with no other water around for 30 miles, we drank it anyways. From there we started the 6000+ foot climb on scree to the ridge of the Panamint’s just below Telescope Peak. Operating on no sleep, this climb became increasingly tough and we got increasingly behind our ridiculous 2.5 day schedule. 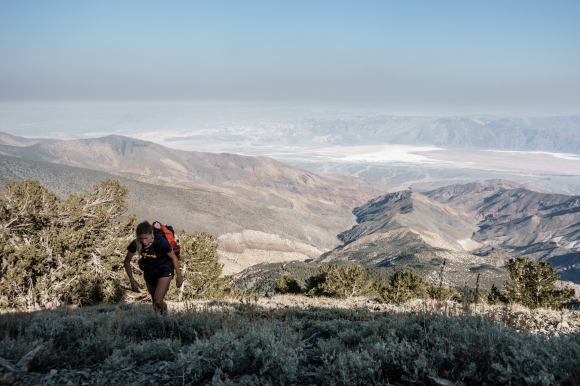 We reached the ridge around 1:30. At this point Adam and Clax had given up on the hike and Ari, Super Soaker and I were about to. Luckily Matt was not ready to give up and his stoke propelled us to keep going. After a shot of caffeine we descended off trail into Tuber Canyon. 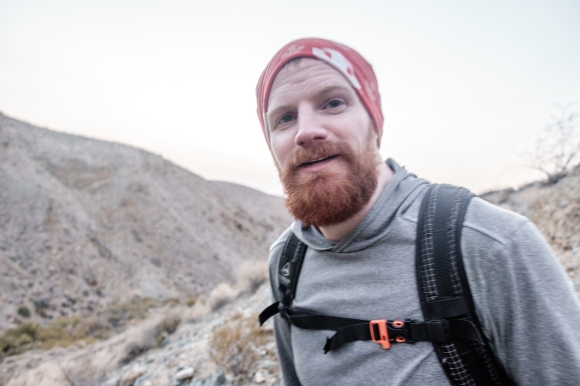 Tuber Canyon got easier and easier as we descended. Suddenly my foot stopped hurting and I was flying down the trail. I felt amazing, the sun was setting, my foot felt good for the first time in two months and it seemed the route was very doable. Then the night came.

After the sunset, we negotiated our way out of Tuber Canyon on a series of high airy ledges on the side of the canyon, that surely would have been scarier in the light. This left us with somewhere between 15-20 miles of dirt road walking or flat cross country travel to our next water at Panamint Springs. Time and distance began to increasingly confuse us as we walked seemingly on a treadmill with nothing but cresote brush on either side. 7 miles from Panamint Springs, Matt grew increasingly delirious and began to sway. Our pace slowed down considerably. Super Soaker announced that he would end his hike at Panamint Spring regardless. Ari and I were both exhausted as well so we decided to sleep for 3 REM cycles (4.5 hours) and reevaluate. So at around 10:30pm we fell asleep on the side of the road in the middle of Panamint Valley.

We woke up in the middle of the night and were daunted by the 63 miles we would have to do the next day to remain on schedule. Matt and Ari were both hurting from the 43 mile day, and I was more sore then expected. My legs were still pretty strong from the PCT but they had lost some strength in two months off. I considered going ahead alone, but I knew that mentally I would not be up to the task without company so I stuck with Matt and Ari.

At the crack of dawn the next morning I saw a lone figure walking by in the Desert. I was half awake and I briefly considered yelling out the make contact. I remembered a night on the PCT where a hiker sped past my campsite in the night. He seemed to be going a very fast pace so I yelled hello to him. He jumped a few feet off the trail and I clearly startled him out of his rhythm. With this in mind I said nothing to the passing hiker who turned out to be Clax.

Having slept 7-8 hours we were now way off of the pace and we resigned to ending our hike in Panamint Springs. I came to accept this as well and we walked the last 7 miles across the windy valley and into the small town. 400 meters from the town a car stopped on the side of the road and a man walked out. It was Adam who had hitchhiked back to us and we were elated to see him. This was the beginning of a chain of events that eventually convinced us to keep going. As we walked into town we ran into our friend Jared, a self described Vagabond who was driving around Death Valley looking for us, just as he was pulling out of the parking lot. We sat with the contents of our backpacks sprawled out across the concrete in the parking lot and debated what to do next. John ended his hike, but for Ari Matt and I quitting quickly ceased to be an option and at around 10:30am we were back on route. We followed the road to Darwing Canyon and then quickly climbed out of it. We walked past many Joshua Trees and eventually back across the highway and onto a dirt road which we followed for a while as the sunset.

We followed the road for a long while, but unlike the last night we were ready this time. The climb up to Cerro Gordo was tough though and we began to loose our composure. We crested over the mountains and got our first glimpse of Owen’s Valley and Cerro Gordo. Ari and I were stoked, but Matt began to “bonk” and become less responsive. Just after Cerro Gordo around 12:30am, Matt made it clear that he needed to stop and he couldn’t make decisions by himself. We found a fantastic campsite next to some unknown potentially hazardous materials in some comfy thorn bushes, but the materials blocked the wind. We had not planned on sleeping this high up so we did not have the right gear. Ari gave Matt her quilt and neither of us got much sleep with only one quilt.

We woke up at 8 and the three day plan was officially impossible. Matt called his boss and got an extra day off work and we changed our plan to 3.5 to 4 days. The ensuing miles were beautiful as we got panormic views of Owens Valley to the west and Saline Valley to the east. 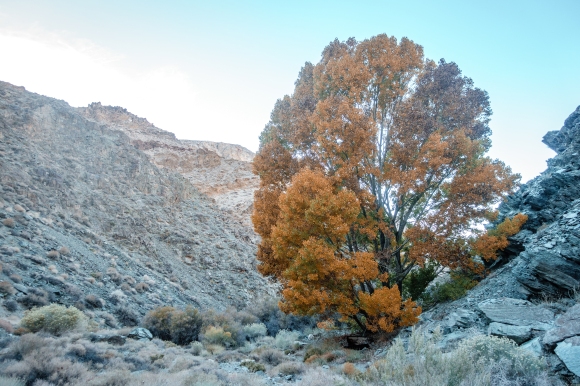 That night we walked into Lone Pine and into Carl’s Junior where we were very out of place. Luckily we met up with Clax, Adam and Super Soaker which was a huge boost to the morale. It turns out Clax had though he was behind us and started  road walking to try to catch up. Unfortunately injury and other difficulties of road walking drove him off the trail. We set out into the night determined to reach Whitney Portal and sleep in Matt’s van setting ourselves up for a Whitney summit bid the next morning.

Many nightime miles later, we collapsed into Matt’s van at Whitney Portal.

Our friend Jared joined us for the hike up Whitney and we set out on the trail we had all done many times before around 6am. 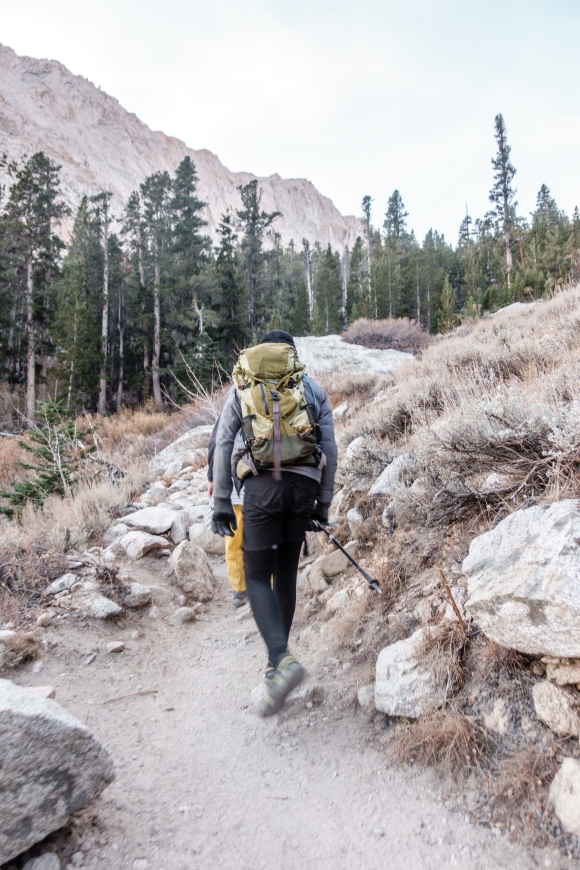 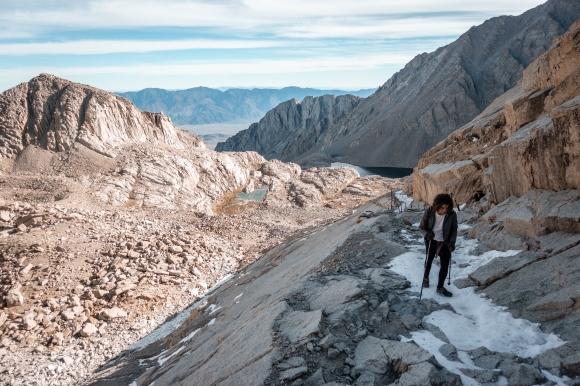 On November 13th at 11:34 AM, 3 days, 8 hours and 31  minutes after we started we reached the summit of Whitney. It felt incredible and we took it all in for the next hour or so.

I got back to the car at 4:59 pm that night and Matt and Ari arrived within the next hour. Matt had set out to do Muir in order to bag his 8th 14er. We drove back to Morgan Hill that night and slept under the much less impressive stars in Matt’s backyard. It will be a tough Veteran’s Day weekend trip to top for sure.

We did set the overall record on this route but I feel that is more due to the lack of attempts on this route and less due to our own speed. Hopefully our attempt will inspire others to try this beautiful route in the same fast and light manner that we did.

Here is a video of the route: