I was excited all summer to embark on the Sierra High Route. After many intense weekend trips I wanted to try a difficult multiweek trip. Every trip seemed to end too soon, so a two week trip sounded very appealing. Matt, Dan and I had no idea how much of the Sierra High Route we would be able to accomplish in our limited time frame but we were excited to head into the off trail Sierra nonetheless. After a long summer though, it was bittersweet leaving my job at Ridge Runners summer camp. But the Sierra was calling. After my last day of work, my dad generously drove us up to King’s Canyon where we camped on the side of the road for the night.

The first day of the High Route involves a long 6000+ climb up and out of King’s Canyon. The climb is mostly on trail but eventually it departs the trail and as Steve Roper says “the truly adventurous part of the High Route begins” As we began to go up the Grouse Pass and we had to set up our tents in a suboptimal spot which quickly became a puddle. Knowing what I know now I would have kept walking until the storm ended or at least kept walking until we found a better campspot.

The second day of the trip was filled with more stunning beauty and more learning on our part. We crossed two passes, Goat Crest Saddle and Gray Pass. At the first drop of rain we set up our tents and waited out a storm which never materialized. Luckily the weather was great for the rest of the trip after this and it never slowed us down again.

The Sierra high route has 34 passes and on the second day we set out to climb three more, Red, White and Frozen Lakes Pass. Red and White Pass went by quickly and we got our first view of Frozen Lakes Pass across the Lakes Basin.

We were able to glissade down most of the way to Marion Lake. Crossing the Lakes Basin took the better part of the day. We had a quick lunch at Marion Lake in our tents because the Mosquitoes were so bad and then kept heading up towards the towering Frozen Lake Pass. This was the first of the notoriously difficult Sierra passes that we crossed and from far away it looked impossible. Like many of the harder passes however, only as we got close it began to look doable.

The descent down the other side was a little loose but not that bad. We were lucky that there was a lot of snow and we were able to glissade most of the way down.

Finally we made it down to the JMT. We joked about the trail being a highway for the first few days and it indeed felt like one compared to the pass we just came over. After days of not seeing anyone, we suddenly saw a lot of people. We camped just below Mather Pass.

On the fourth day Matt and I split off from Dan as he was really feeling the effects of altitude and wanted to take an easier day.  He stuck to the JMT well we stayed on the High Route. After quickly climbing Mather Pass, we went off trail again and up and over Cirque Pass. Potluck Pass was next and it looked impossible from a distance. Luckily as we got closer we found a doable albeit difficult steep route up it.

We then descended into the Palisade Bowl, and walked beneath 5 of the 14,000 foot peaks in California, what a sight! Our fourth pass of the day, Knapsack Pass, went quickly and soon we were back on trail and descending the switchbacks into LeConte canyon. Where just as all of the light disappeared we reunited with Dan. Dan saw 70 people that day on the JMT but we only saw one on the High Route.

The next day Matt and I were quite tired from doing 4 passes the previous day and we decided to take it easy, and call it early at Evolution Lake.

On the sixth day we set out to climb over the famed Snow Tongue Couloir, but took a wrong turn and went up Alpine Col instead. Alpine Col still crosses the Monarch divide and still gets you out of King’s Canyon National Park and is considered slightly easier, but there is a large boulder field at the bottom with rocks the size of cars that forces you to constantly climb and descend, and this cost us many hours. This coupled with the fact that Matt was not feeling well, lead to a short day.

On the 7th day we continued north towards Lake Italy, ascending passes and descending into a French Canyon, just to climb back out of it. The section just south of Lake Italy was on of my favorite sections of the whole trip.

We camped just South of Lake Italy. On the morning of day 8, Dan announced that he was going to exit over Italy Pass and would rest and then meet us in Mammoth. Matt and I took off and climbed three passes that day with no more then a few five minute breaks. The next section of the High Route had some beautiful sections like Gabbot Pass and Laurel Pass, but most of the route was very low elevation. Second Recess required a large descent and ascent and walking over a lot of fallen trees. We walked until sunset and set our alarms in order to get into Mammoth at a descent time. On the ninth day Matt and I got into Mammoth in the afternoon and were completely exhausted. We had both pushed ourselves very hard after  Dan left. As it turned out Dan had only gotten into Mammoth a few hours before we did. We all decided to get a room in a hostel and contemplate the next steps.

It was quite weird being in town after 9 days in the Wilderness. Suddenly my phone lit up with one hundred notifications, the bus ride into town felt like a roller coaster. After nine days of only worrying about miles and food, there was a lot on my mind and I felt lost and confused. The main thing that I thought about was the upcoming solar eclipse. I really wanted to complete the High Route in one go, but I also knew that the High Route would always be there whereas the eclipse would only last two minutes. It may have been possible for me to complete the High Route and hitchhike up to see the eclipse but it would have been risky.

Dan and Matt also had other things on their minds, Matt had a lot of work to get done on his solar vehicle project before school started and Dan had a flight back home to Mexico to catch. After much discussion and back and forth we decided that Dan and I would complete the next section to Tuolomne and hitch home from there leaving me with 30 miles and 6 passes to do over Labor Day weekend in two weeks time. This way I would have plenty of time to hitchhike home and I had a sure ride to see the eclipse with my family. Matt on the other hand had too much to do and hitched back to Berkeley.

On day 10 Dan and I descended into Red’s Meadow and climbed up towards Nancy Pass and the Minarets. Both of us were exhausted from the first part of the High Route and our bodies were pretty beat up so we decided to take it easy and camp just past Nancy Pass. After hiking quickly and pushing ourselves so hard south of Mammoth, it was nice to slow down and enjoy the hike a bit more.

We woke up on the 11th day to the stunning Minarets towering above us. We quickly climbed to Minaret Lake and stopped and took in the view.

After climbing up to Cecile Lake we undertook one of the sketchier descents of the trip, descending to Iceberg Lake.

The 12th day was one of the more beautiful days on the trail. We made our way from Thousand Island Lake, over Glacier Pass and past Lake Catherine towards the beautiful Bench Canyon. 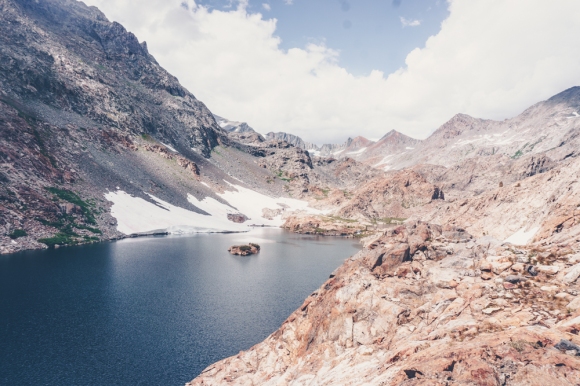 We camped just outside of Yosemite that night and although we did not know it, it was my last night on the trail. The next morning we climbed over Blue Lakes Pass and began the 20+ mile on trail section into Tuolomne Meadows. I didn’t take many pictures of this section as it was mostly in the trees. 12 miles from Tuolomne we caught a brief glimpse of Half Dome from a distance and Dan, who knew he wouldn’t be back in California for quite some time couldn’t resist ending his hike in the Valley which was about as far away as Tuolomne Meadows.  We said our goodbyes and I continued northward alone. I considered camping in the wilderness and hitching out in the morning, but I was exhausted and really wanted to get home that night. T

The High Route had been very beautiful but also quite tough. I carried far too much stuff and got large blisters from not taking care of my feet properly. I was excited to go home and rest but I knew I would miss the freedom of the Sierra. As I limped the last few miles to the road, I was already planning next Summer’s adventure, hiking from Mexico to Canada on the Pacific Crest Trail.

A german couple gave me a ride to Groveland, halfway home just as the sun was setting. They told me they were underwhelmed with the Sierras after visiting the Alps. They had seen Tuolomne Meadows and Yosemite Valley but they were not impressed. One really can’t understand the true beauty of the Sierra until they get far away from roads and even trails.

My friend Dan wrote up a trip report as well for this trip as well and shot some beautiful film pictures of the trip: https://acasualvagary.wordpress.com/2017/09/07/the-range-of-light-a-film-essay/#more-590